Sophia is currently ALL about birthdays–if asked she can tell you exactly when her birthday is and what she expects (a pretty cake with sprinkles, and balloons).  She learned about “America’s Birthday in the little “camp” she’s been going to and was very excited about it!  All day yesterday we heard “I’m going to a parade, and eating hamburgers and seeing fireworks MOM–Happy Birthday America!”  Yes, our town celebrates a day early–to get ahead of the game I guess…

I have to admit though I love small towns…and mall town parades are the best!  This is the kind of parade where the kids chuck gently throw candy to other youngsters along the route.  The fire department started the parade with ALL of their trucks–and those from the neighboring town showed up as well.  This was  followed by an amazing number of vintage tractors!

This was on the side of one truck —Rat Bomb Rod Shop–slow but expensive–hilarious!

Our town was an old German Settlement….this float celebrates that…

We also had our share of monster trucks and horses–all good stuff out here in small town USA!

This looks painful but I assure you- there were crazy giggles coming out of her.

Sophia actually managed to stay up–barely, for the fireworks.

My Olympus has a fireworks setting so I decided to try it out–I wasn’t as still as I should have been for most (I blame that on the monkey who was here there and everywhere trying to get comfortable) but managed to get a few good shots anyway. 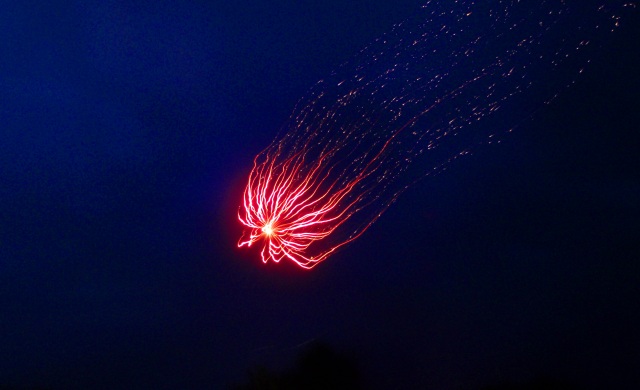 At the end Soph was DONE, but still clutching her flag–I think its fair to say a good time had by all!